Calling all daredevils: are you looking for a truly death-defying winter challenge? Have you been thirsting for a slope that offers a real challenge, potential for dismemberment and bragging rights to match? Well this list is for you – the top four most daring ski resorts. This is no snow bunny glade; these are triple black diamond, expert-only, world famous slopes that offer the adrenalin-rush of near-death and the comfort of a nearby chalet. 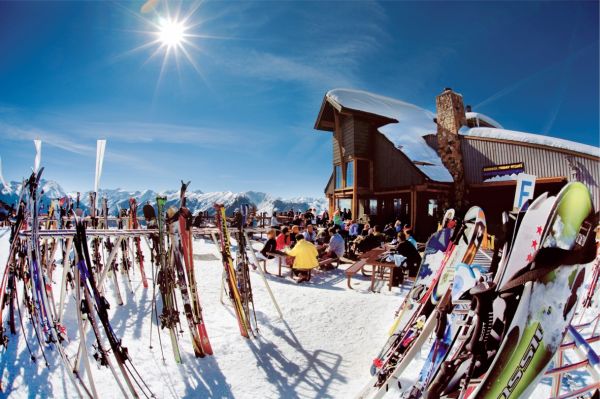 •    Aspen Snowmass Ski Resort, CO: Aspen is world-renowned for its glamorous chalets and celebrity sightings, but Snowmass is strictly snow-business. Thirty-two percent of the ninety-one runs at this location are classified as expert. Over half of all the slopes at this resort at difficult or most difficult. And if you are looking for flips and jumps, Snowmass just added a twenty-two foot superpipe to its roster of hair-raising attractions.

•    Brackenridge Ski Resort, CO: Also in the Colorado Rockies, Breckenridge is one of America’s most popular ski resorts, possibly for the frequent celebrity sightings – over 1.6 million skiers during the 2010-2011 season! This resort is also popular with expert skiers because over half of its runs are classified as expert. There are plenty of double black diamond glades, bowls and backcountry slopes and a terrain park designed for extreme ski and snowboarding. Breck is also home to the highest charlift in North America.

•    Jackson Hole Mountain Resort, WY: This resort is renowned for its accessibility (it has its own airport) and the full access it offers to visitors – Jackson Hole prides itself on being “100% open”, the whole mountain. Which means true, diehard, daredevil skiers can, with the permission of Jackson Hole snow patrol, ride one or both of the mountain’s extreme couloirs: S & S Couloir and Corbet’s Couloir. Corbet’s starts out as a twenty foot drop off a cliff face. Work those edges and try to hang on. Surviving the opening pitch is the worst of it, however, and afterwards you can ride the forty degree slope with greater ease. S & S is not so easily tamed. This baby opens with a thirty foot drop into a rocky chasm and is rarely open due to unsafe conditions. If you manage to get your shot, be sure you’ve made friends with the ski patrollers who might be sledding you down to safety, should this insane couloir take you down.

•    Harikiri, Mayrhofen, Austria: This list has been a little US-heavy, but only because many of Europe’s most terrifying ski hills are not attached to resorts, and thus could not be included. However, Harikiri (named for the Japanese suicide ritual) is the steepest groomed slope in the world – snow machines are suspended on cables that keep them on the thirty-eight degree slope. Grab the gondola at the Sport Hotel Strass and get ready for the ride of your life.