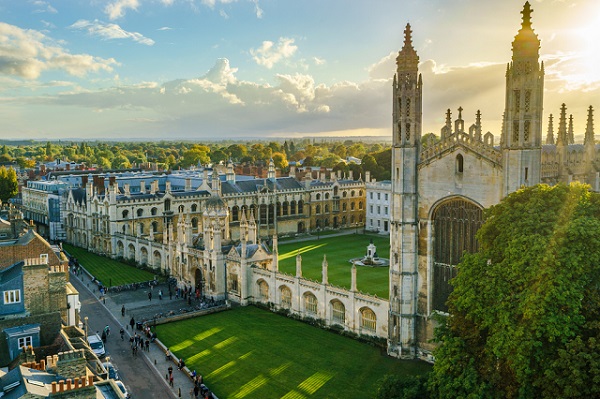 Two of Britain’s most illustrious and historic universities are that of Oxford and Cambridge. The irony is that Cambridge University’s existence was a result of a schism that developed between certain sections of scholars who were enrolled in Oxford. It all began when Oxford was the focal point of academic excellence in England, with students from all across Europe travelling to the town to seek admission at its hallowed university. As a consequence there arose a severe shortage for accommodation, with home owners charging ridiculously high rents to let out their homes. This resulted in a faction of scholars and students deciding to sever ties with Oxford and setting up an educational institution in Cambridge. While Oxford University has the honour of the oldest university in the world, Cambridge follows suit at second position.

The town derives its name from the River Cam that meanders through Cambridge. The university itself was founded in the 13th century after scholars and students moved here from Oxford. There are 31 colleges that are affiliated to the University of Cambridge. And it has produced 90 plus Nobel laureates that stands testimony to its academic excellence. Just some of the academic luminaries who have done Cambridge University proud over the years, includes greats like John Milton, William Wordsworth, Charles Darwin, David Frost, Alastair Campbell, Lord Mountbatten, Oliver Cromwell, Prince Charles, James Watson, Stephen Hawking, David Attenborough and Salman Rushdie to name only a select few.

Getting to Cambridge is relatively easy from London as it is just about 90 minutes by road. There are several bus tour operators from London and it is the best way to combine a trip both to Cambridge and Oxford on a single trip. In terms of luxury hotels Cambridge UK has a fine selection to choose from in the centre of town. You could begin a self-exploratory tour at Silver Street beginning with St. Botolph’s Church that is out of the oldest churches in the area. And while the area is packed with students and people milling around the main mode of transport are bicycles. Once done sightseeing head towards King’s Parade that is a prominent landmark in the town. There are several well known colleges located here that include the likes of Corpus Christi, Queen’s College and King’s College among other famous colleges. The King’s Parade area is a busy intersection and there are several restaurants and shops to be found in the area.

Take a diversion to get to Benet Street where you must visit one of the oldest pubs in town the famous Eagle Pub. The Eagle was established in the 16th century and was originally named the “Eagle and Child”. It is one of the larger pubs and offers a fine selection of traditional English ales, a choice of fine wines and tuck into its fabulous food menu. It is the site where Watson and Crick made their ground breaking scientific discovery of ‘DNA’ and also houses the ceiling bearing the graffiti signatures of RAF pilots, who returned from the Second World War. While at the pub look for the window that stays open whatever the weather. There is a legend that if shut, it will kill the occupant of the room! 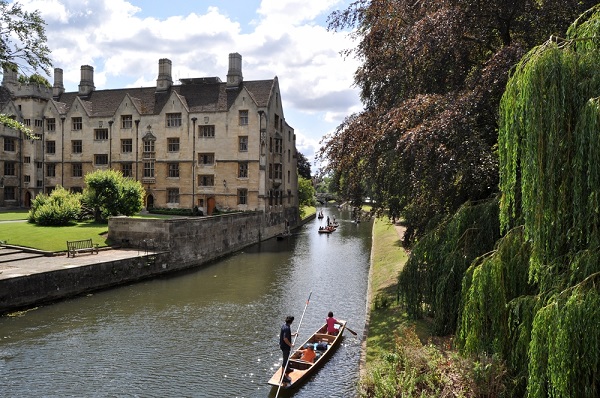 While in the King’s Parade section look out for the large Corpus Clock situated at a corner of Corpus Christi College. It was the brainchild of and funded by John C. Taylor, an alma mater of the college. Stephen Hawking, the famous Cambridge physicist, unveiled it to the public in September 2008. It is a structural clock that is about 1.5 metres in diameter and has a gold-plated steel disc. The time is displayed through the use of individual slits with blue LEDs in three concentric rings to display the time in hours, minutes and seconds. One of the most striking features of the clock is a metal sculpture of an insect that appears to gobble up the seconds as time passes. The movement of the insect creates a weird grinding din that is apt for the grim looking creature. The clock rings on the hour every hour with the sound produced by a chain that strikes a wooden coffin that is placed behind the face of the clock. An unusual but visually striking attraction it draws the attention of all those who visit Corpus Christi.

When you move ahead along King’s Parade it leads to Trinity Street that is home to the legendary Saint John’s College. When the other colleges do not allow access to the public, St. John’s accords visitors’ access for a small fee that is well worth it! It is the perfect example of the creativity of the founders, who transformed a former disused hospital building from the 16th century into one of the finest academic institutions in England.

There is a well delineated route that takes visitors all through the college. Along the way they pass through its front gate, its three courts, its chapel (including the chapel court), the new court and the famous Cripps edifice. Once you move out of the third court you will cross the Bridge of Sighs that was constructed over the Cam River. Although the architecture all along the route is incredible, this particular section that houses the third and new court along with the Bridge of Sighs is absolutely stunning to behold.

Once you are done with a quick tour of these areas and are up to it, you could return to your hotel for the day. If you do have the time you could continue your exploration of the many attractions at Cambridge the next day or two. Alternately you could choose to head to another gem, the town of Oxford to explore its numerous historical attractions.