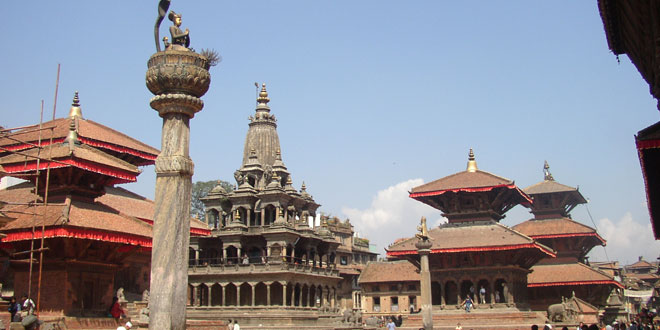 Patan, also known as Lalitpur, is located on the south of Bagmati River and it is one amongst the three royal cities in Kathmandu valley. It is also the oldest among the three cities. Patan Durbar Square has been declared as World Heritage Site by UNESCO. Famous for its rich cultural heritage, Patan is home to fine arts. The splendid woodcarvings and metal statues speak stories of the skills of artisans. Considered to be established during the 3rd century BC, Patan is a cultural center where many festivals are celebrated every year. Four Ashoka Stupas built in four cardinal points of Patan are considered very important architectural treasures of the land. The Stupas are said to be built by Emperor Ashoka during 250 BC. Temples, palaces, statues and stone baths are some of the constructions found in Patan Durbar Square. Given below are some of the famous places in Patan Durbar Square.
Hiranya Varna Mahavihar: Also referred to as the Golden Temple, Hiranya Varna Mahavihar was built by King Bhaskar Verma during 12th century. The golden façade of the three-storied Pagoda looks stunningly beautiful. Buddha’s golden images and wall carvings are found inside the temple.

Patan Museum: Patan Museum ranks among the best museums in the Asian continent. The museum is situated in an ancient palace, which dates back to 1734. The collections in the museum depict the rich cultural history of Nepal. Most of the collections are bronze statues and gilt copper objects. The garden adjacent to the museum offers a pleasant sight and a peaceful resting place.

Patan Zoo: Nepal’s only Zoo, Patan Zoo, was established in the year 1932. Initially a private zoo, the year 1956 saw the zoo opened to public. The zoo is home to more than 700 species of animals, which include 14 endangered animals in Nepal. The pond in the zoo offers boating facilities.

Kumbeshwor Temple: Kumbeshwor Temple is one among the two 5-tier temples in Nepal. It is dedicated to Lord Shiva. The temple dates back to 1391 and it was initially a two-tiered construction. The natural spring inside the temple is considered to come from the famous Gosainkunda Lake.